Posted on March 24, 2020 by TrackRecord Administrator

Dollar weakened on Tuesday as the US Federal Reserve’s announcement that it would buy US Treasuries and Mortgage-backed securities in unlimited amounts to stabilise the market topped the USD bulls in their tracks . The heavily battered commodity currency group (AUD, NZD & CAD) enjoyed a relief rally on the day. Gold rallied more than 6% as in a world full of easy money, hard assets are the safe refuge.

S&P 500 fell 2.93% on Monday in another volatile session, as disappointment over the Senate’s inability to advance its stimulus bill outweighed the unprecedented stimulus measures announced by the Fed. The Dow Jones Industrial Average declined 3.12%, the Russell 2000 declined 1.1%, and the Nasdaq Composite declined just 0.27%. U.S. 2yr Yield down 9bp and U.S. 10yr Yield down 16bp.

Yesterday’s action started when the S&P 500 index futures hit limit down within a minute of Asian open after the Senate failed to gather enough procedural votes for its stimulus bill. Losses were later trimmed on some cautious optimism that another vote for a revised plan would fare better, but the real move came after the Fed’s stimulus announcement sent futures into the green.

Briefly, the Fed lifted the $700 billion cap on its purchases of Treasury and agency mortgage-backed securities and said it will buy “in the amounts needed.” In addition, the central bank established new credit facilities and said it will be buying investment-grade corporate bonds, municipal debt, and U.S.-listed exchange ETFs for investment-grade corporate bonds.

Despite the Fed’s efforts to support the system and prevent confidence from eroding further, investors continued to sell into strength. The index rallied more than 8% on the news but lost all those gains within minutes and traded in a volatile fashion for the rest of the day. The disappointing price action suggested that the market was signaling Washington to get its act together and approve a long-awaited stimulus plan for Americans and businesses.

The S&P 500 did battle back to just below its flat line heading into the second procedural vote in the afternoon, but the rebound effort was squandered after it failed again. Senate Majority Leader McConnell (R-KY) said that procedural delays could push another vote out to Friday, which is a long time for a fearful market.

A far-reaching Covid-19 economic stimulus package remained stalled in the U.S. Senate on Monday as Democrats said it contained too little money for states and hospitals and not enough restrictions on a fund to help big businesses. A 49-46 vote left the $2 trillion measure short of the 60 votes needed to advance, as the chamber remained deadlocked for a second day. Only one Democrat, Senator Doug Jones, voted with Republicans to advance the bill.

IMPACT: Stocks fell about 3% on Monday due to the roadblock as Democrats say it too heavily favors corporations at the expense of public health and workers. Even an extraordinary flood of support from the Federal Reserve wasn’t enough to lift stocks, as frustration with Washington grew and the number of Covid-19 cases rose. Markets are likely to remain incredibly volatile as long as the number of new infections accelerates. Until then, investors are looking for both central banks and governments to do their parts to support the economy.

Saying “aggressive action” was needed to soften the blow to the economy from the Covid-19 pandemic, the Federal Reserve on Monday announced it would purchase an unlimited amount of Treasuries and securities tied to residential and commercial real estate to ward off a credit crunch.

The Fed said it would buy assets “in the amounts needed” to support smooth market functioning and effective transmission of monetary policy. The Fed had previously set a $700 billion limit for asset purchases but used up more than half of the ammunition last week alone. In addition, the Fed announced several new lending programs worth $300 billion to support all corners of the financial markets.

IMPACT: Though still cast in the usual Fed language of ensuring “liquidity” and keeping financial markets moving, the implications are more profound – of central bank loans scaled to such a point that they undergird payrolls, rents, and firm survival as the Covid-10 economic shock rolls through. The effort shows the Fed casting aside constraints on several fronts to ensure that companies can issue bonds and get loans and limit the risk that the halt in business required to combat the health crisis may lead to widespread failures and bankruptcies.

U.S. governors and mayors on Monday became more desperate in their pleas for help from the federal government to fight Covid-19 as the military prepared to set up field hospitals in New York and Seattle to ease the strain on creaking health services.

As health authorities struggled to cope with the rising number of sick people and the U.S. Senate failed to advance an economic stimulus package, Defense Secretary Mark Esper said the U.S. military is preparing to deploy field hospitals to New York and Seattle.

The planned hospitals, essentially tent facilities that can be rapidly set up, can only handle a limited number of patients and are less suited to treating highly infectious people who need to be isolated. But they can relieve pressure on hospitals by treating patients with illnesses other than COVID-19.

IMPACT: A lack of coordinated federal action was causing chaos for states and municipalities, and even putting them in competition with each other for resources. Trump on Sunday defended his decision to hold off using the federal defence production act (which allows the government to tap onto private companies to help alleviate the strain on resources), on the grounds that nationalizing businesses “is not a good concept.” With the addition of Maryland, Indiana, Michigan, and Massachusetts on Monday, 15 out of 50 U.S. states have now imposed restrictions on people’s movements to curtail the virus, putting the country on a track similar to those of the most devastating European countries such as Italy and Spain.

The flash PMI reports will be the first big numbers for March in the Euro area. Given that many parts of Europe started imposing lockdowns during March, analysts’ forecasts for the flash releases are pretty grim. The manufacturing PMI is expected to drop from 49.2 to 39.0 and the services PMI is forecast to plunge from 52.6 to 36.5. The composite PMI is projected to fall from 51.6 to 37.8.

After coming under fire for not doing enough and for communication errors, the European Central Bank appears to have scaled up its response and announced last week that it will buy an additional 750 billion euros of public and private sector securities on top of its existing purchases. The move seems to have gone some way in calming equity and bond markets and this likely means ECB policymakers will not be in a hurry to announce other bold measures anytime soon. Unless of course, the incoming data over the next few weeks, including the March PMIs, start to indicate that the Eurozone economy will require a lot more help than what’s already in the pipeline.

OVERALL SENTIMENT: The Fed found yet another kitchen sink in the house to throw at the markets. With unlimited quantitative easing, they are now prepared to buy as many bonds as the market wants to sell for as long as it takes to stabilise the market. And yet, the stock markets rallied more than 8% on the news and gave it all up and then some a few minutes after.

This is a telling sign of the market sentiment. The next thing that can be thrown at markets is the much-vaunted stimulus bill from the US government. The market awaits. 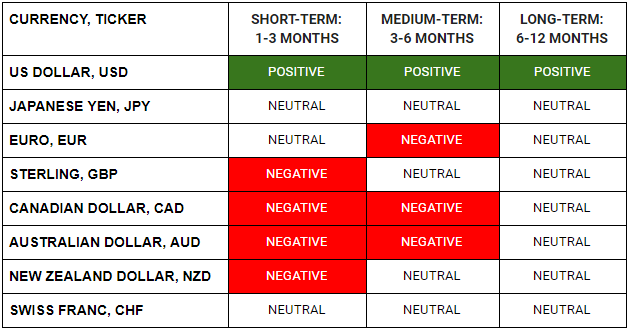 The Roach Motel is a roach trap that has a lure that attracts roaches to enter but once inside, they get stuck in there and can never escape. This is much like some of the carry trades in this world. Investors are lured by the promise of high yields and high carry.

All that is needed is for time to pass, and the investors will get to enjoy a high return. Of course, the returns can be spiced up by employing leverage. If you have a dollar, you can use that dollar as collateral to borrow 3 dollars and use that 3 dollars to invest in that carry trade.

It all goes swimmingly well until things start to go wrong. When something goes wrong with the world, volatility goes up, and liquidity dries up. Every investor now wants to redeem their investment before the losses pile up.

With so much leveraged money invested in the trade, the exit is small, and investors find that the price of earning all that easy money is that it’s not easy to escape when things go wrong.

This is what the investors of the world are facing right now. Many carry trades (Commercial Paper, high yield bonds, basis trades, Emerging market currencies) are all under stress and many are stuck with their bad investments and facing margin calls. That’s why there’s an indiscriminate rush for cash right now.

Many trades are easy for you to get into, but some you cannot get out of. Much like the Roach Motel…